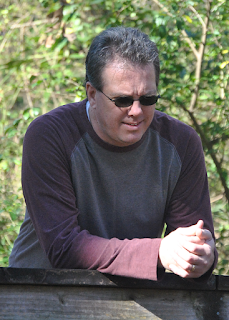 A.J. Brown is a southern-born writer who tells emotionally charged, character driven stories that often delve into the darker parts of the human psyche. Most of his stories have the southern country feel of his childhood.

A.J. writes in a conversational style that draws the reader in and holds their attention. His characters are average people with average lives who are layered with memories and emotions and are fallible, just like anyone else.

A.J. draws inspiration from every day events and conversations. The characters of his stories are drawn from people he has met or seen during his life. Some of the best stories are inspired by his two children.

Though he writes mostly darker stories, he does so without unnecessary gore, coarse language, or sex.

A.J. is also a husband to Cate and a father to two kids, who often inspire him in the most interesting ways.

More than 200 of his stories have been published in various online and print publications. His story Mother Weeps was nominated for a Pushcart Award in 2010. Another story, Picket Fences, was the editor’s choice story for Necrotic Tissue in October of 2010. The story, Numbers, won the quarterly contest at WilyWriters.com in June of 2013.

If you would like to learn more about A.J. you can check out his blog, Type AJ Negative. You can also find him on Facebook (ajbrown36).


You can purchase A.J.’s newest novel, Dredging Up Memories and his collection, A Stitch of Madness (both released by Stitched Smile Publications in January, 2016), or either of his other short story collections--Along the Splintered Path, and Southern Bones--on Amazon. You can also find his novel, Cory’s Way, as well as his collaborative effort with M.F. Wahl, All We See is the End/The End is All We See and his novella, The Forgetful Man’s Disease on Amazon. A list of his publications along with links to many of his stories can be found at Type AJ Negative.

What works/authors have had an impact on you professionally or personally?

Charlie and the Chocolate Factory by Roald Dahl, Where the Wild Things Are by Maurice Sendak, and The Monster at the End of this Book by Jon Stone. What? You asked what books had an impact on me personally, and those three impacted my childhood! How? They are stories I loved as a kid that carried over into my adult life. Roald Dahl wrote interesting pieces that made you think, and Sendak wrote, what I feel, is the greatest children’s book of all time. And who doesn’t love Grover? I mean, for real?

If you could be a famous person (living or dead) for a day, who would you be and why?
This was hard. I could have gone with the obvious and say Stephen King, but I’m going to say Ellen Degeneres. She uses her show, popularity and finances as a platform to do great things for people. I like to do things for people and given a day with her resources, I think I could help a lot of folks. That would be an awesome day.

What is the oldest thing in your fridge and how old is it?
Probably a bottle of mustard and I honestly don’t know. It winked at me the other day and I closed the door quickly. I sent my kid in to throw it out and haven’t seen him since. I hope he’s okay.

Dessert or no dessert?
Absolutely. Why? Nothing tops off a good meal like a great dessert. I love donuts, but for dessert, I usually go for the chocolate cake.

What is your favorite motivational quote?
If you believe in yourself, anything is possible. (I have no clue who said it. I saw it once and said, yeah, totally true. I have believed in myself ever since.)
Posted by Pembroke Sinclair
Email ThisBlogThis!Share to TwitterShare to FacebookShare to Pinterest
Labels: aj brown, interview, meet an author, pembroke sinclair
Newer Post Older Post Home