Mind's Eye by Rebecca A. Rogers‏

Rebecca expressed her creative side at an early age and hasn’t stopped since. She won’t hesitate to tell you that she lives inside her imagination, and it’s better than reality.

She’d insert something here along the lines of living in the Northeast, USA, or Europe, with her wonderful husband and their dogs, but these things haven’t happened yet. Instead, she’ll tell you she’s an avid gamer, chocoholic, coffee addict, animal lover, and owns way too many books and shoes. 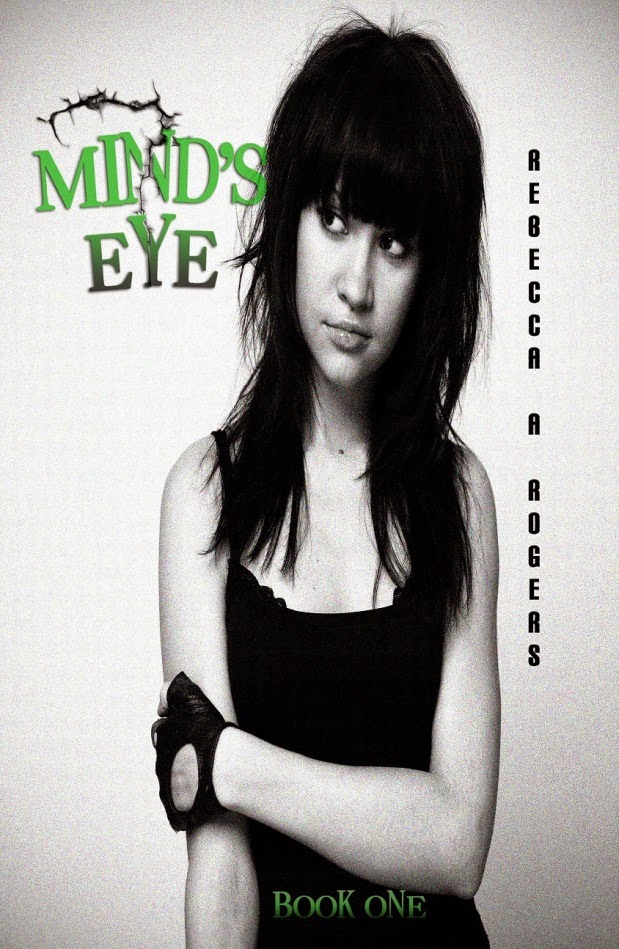 Seventeen-year-old Kearly Ashling can travel anywhere her mind takes her—literally. Becoming Empress of the planet Cyeor and battling monstrous, otherworldly creatures isn’t a problem. Living among the elves on the Plains of Glasslyn has yet to be an issue, as well. Even touring normal places like Paris, London, Tokyo, and the Amazon Rainforest isn’t difficult.

But traveling through her imagination isn’t just fun and games—it has consequences. Following a battle on the planet Cyeor, she’s visited by a guy who’s unimagined. He warns her to stop using her gift or they will find her. Kearly doesn’t heed the messenger’s advice and soon wishes she had. When the messenger finds her again, he transports her to the M.I.N.D., a corporation which specializes in “healing the psyche.” Once she’s inside the M.I.N.D.’s doors, however, Kearly realizes escaping is nearly impossible.

Now, she must figure out the M.I.N.D.’s true intent, try not to fall for the irritating-yet-handsome messenger, and find a way to outsmart the organization before they stop her from ever imagining again.

Q) What inspired you to write this story?
After a long day at my old nine-to-five job, I came home and collapsed on my couch. It was just one of those days where I wished I was anywhere but there at that moment—sailing on a cruise, lounging on a beach, etc. I imagined sipping on a piña colada, with a miniature pink umbrella poking out of my glass. Then I thought, How awesome would it be to travel anywhere my imagination takes me? Whether it was this world or one that didn’t exist, the idea that I could escape to another time and place, be whoever I wanted to be, sounded like so much fun—and so did turning that concept into a story.

Q) How long did it take you to write?
The original first draft was written way back in 2009, and it took me about three months to write. This time around, though, it only took a couple of months, because the book was written. I just had to do some major editing and change the plot, so it could be converted from a standalone novel to a full-blown trilogy.

Q) What is your favorite thing about writing?
For me, it’s the escapism. It’s the same rush I get when I’m reading. I’m lost in incredible worlds, living lives I’ve only dreamed of. The outside world—the real world—doesn’t exist anymore; it’s just the story and me.
Q) What is your least favorite thing about writing?
Getting the first draft written. I know a lot of authors say this is the easiest step for them, but it’s not for me. Even though I outline like crazy, and know everything that’s going to happen, the first draft is always the slowest process.

Q) If you could be any famous person for one day, who would you be and why?
Probably J.K. Rowling. I’d love to step inside her imagination.

Q) What is the oldest thing in your fridge and how old is it?
Oh, wow. Um… I think there are some leftovers from a couple of weeks ago. I’m sure they’re growing a new species by now.

Q) What can readers expect from you in the future?
I plan on finishing the Mind’s Eye trilogy this year, and then I’ll be moving on to an epic fantasy series about four queens battling for a powerful, yet sacred, crystal.
Posted by Pembroke Sinclair
Email ThisBlogThis!Share to TwitterShare to FacebookShare to Pinterest
Labels: bewitching book tours, blog tour, mind's eye, rebecca a rogers
Newer Post Older Post Home