She believes stories are the best kind of magic there is. And life would be horrible without magic. Her hobbies include losing herself in the minds and souls of characters, giving up countless nights of sleep to get to know said characters, and trying to introduce them to the world. Sometimes they appreciate her efforts. The process would probably go quicker if they’d bring her a cup of coffee now and then when stopping by. Characters—what can you do, right? 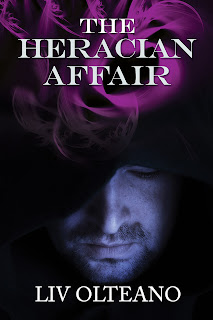 Even years after Rizzo Berg’s lover and Dom died in combat, the memories torment him. Following a particularly disappointing date, Rizzo goes to sleep in his apartment only to wake up on a spaceship with tall, gorgeous, alien Captain Conrad D’Ollet of Heracia, a man so deliciously dominant Rizzo’s knees turn to jelly.
Apparently the Heracians need help, and Rizzo is a humanitarian through and through. Spending more time around Conrad is totally not one of the reasons he wants to lend a hand.

Q) What inspired you to write this story?
I’ve always had an interest in the abduction scenario and power dynamics. The abduction scenario in itself implies a clear type of power dynamic, and this couple, Rizzo and Conrad, just came to me in that context. Their interaction and the flavor of their couple simply wrote itself, I don’t honestly know of a better way to describe it.


I think inspiration to write any story is a very personal mix of everything you’ve ever thought, felt, seen or known, and this one extraordinary moment of seeing it all through a slightly different lens. That moment is so powerful, so intense, that just hanging on to it (or being haunted by it, as the case may be) simply brings to life characters and parts of their lives. Anything can set off the actual writing, but I often find the story itself is already there, in my mind, waiting for me to finally give it the pages it needs to reach others.


Q) How long did it take you to write?
That’s a bit of a funny story, actually. I wrote The Heracian Affair as a get-away from another story I was working on that was frustrating the ever-loving heck out of me. I’m experimenting with age groups and genres and such, and trying to write a particular type of story had me often bubbling with frustration. So when that happened, I’d escape into this other fabulous story that had me giggling and fanning myself as I wrote it. Sort of worked as a feel-good writing break or something along those lines.


I think it took me around two months total to have it done and send it to the publisher I’d sort of dreamed to someday work with. And I can’t begin to tell you how big of a squealing raving lunatic I became when they got back to me saying ‘yes’.


Q) What is your favorite thing about writing?
I’ve actually given this some thought, because it’s something I’ve been doing ever since I can remember. When I was a kid I used to keep this journal-like sort of thing, write down things about something that had happened or I’d seen or so on. Writing has always been a part of my functioning, just like drawing was and still is. I didn’t think of trying to do it ‘for real’ until recent years, but I’ve always been infatuated with the power of words, and images as well for that matter.


I think my absolute favorite thing about writing is that it can be immeasurably powerful, in so many different ways, contexts and circumstances.


Q) What is your least favorite thing about writing?
Hm, I think I’d have to say that my least favorite thing is the uncertainty that comes with it. Especially in terms of publishing what you’ve written. I for one always find myself wondering if this thing I’m working is good enough, if it’ll be picked as the belle of the ball, if anyone will want to dance with it and hold it near their hearts–perhaps even take it home and keep it.


Maybe when you’re a super-famous bestseller this doesn’t really apply anymore, but until you get to be one, there’s a lot of wondering and waiting involved. And disappointment, I guess, depending on how high your hopes might have gotten in the process.


I’m not an awfully patient person, and I like knowing, not wondering. Nobody said it was easy, right? And it’s not. But right now I can’t conceive of doing without it all. J


Q) If you could be any famous person for one day, who would you be and why?
Wow, this is a really tough one, all the choices and possibilities!! Does it have to be someone from present day, alive and kicking now, or could it be someone from the past? Would it still be me but inside this person’s life and looking like them? Or would I actually become this other person entirely and not be me at all for one day? Like I wouldn’t exist anymore, but then come back to being me again when the day would be over? *keeps asking questions until the day is over and the opportunity is lost, lol*


Must it be a real person? I don’t think I’d like to be another person, actually. Maybe if I could be some superhero or have some supernatural awesomesauce powers for one day, then yeah, I’d wanna do that. But just to be someone else for a day? Neverrrrrmind. This one day deal is already giving rise to questions I’m not sure I wanna find out the answers to, lol.


Q) What is the oldest thing in your fridge and how old is it?
I’m too scared to look. You look, I’ll be right behind you, I swear!


Q) What can readers expect from you in the future?
More smexeh fighter-aliens bickering and having hot one on one action going on, because I’ll deliver :D
a Rafflecopter giveaway