Prince of Tricks by Jane Kindred‏ 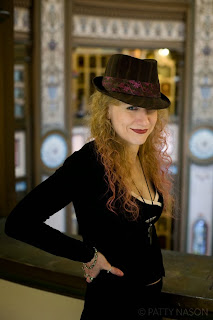 Jane Kindred is the author of The House of Arkhangel’sk trilogy, the Demons of Elysium series, and The Devil’s Garden. Born in Billings, Montana, she spent her formative years ruining her eyes reading romance novels in the Tucson sun and watching Star Trek marathons in the dark. She now writes to the sound of San Francisco foghorns while two cats slowly but surely edge her off the side of the bed. 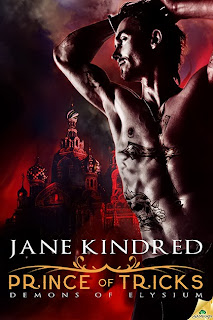 When desire rises, angels will fall. One, by one, by one…

Over the past century, Belphagor has made a name for himself in Heaven’s Demon District as a cardsharp, thief, and charming rogue.

Though the airspirit is content with his own company, he enjoys applying the sweet sting of discipline to a willing backside. Angel, demon, even the occasional human. He’s not particular. Until a hotheaded young firespirit steals his purse—and his heart. Now he’s not sure who owns whom.

A former rent boy and cutpurse from the streets of Raqia, Vasily has never felt safer than in the arms—and at the feet—of the Prince of Tricks. He’s just not sure if Belphagor returns those feelings. There’s only one way to find out, but using a handsome, angelic duke to stir Belphagor’s jealousy backfires on them both.

When the duke frames Vasily for an attempted assassination as part of a revolutionary conspiracy, Belphagor will do whatever it takes to clear his boy’s name and expose the real traitor. Because for the first time in his life, the Prince of Tricks has something to lose.

Q) What inspired you to write this story?
The Demons of Elysium series is a related-world prequel to my trilogy, The House of Arkhangel’sk. I wanted to write about the two demon characters in that series and see how they got together, and to indulge in some much sexier scenes than I’d been able to do in the fantasy trilogy.

Q) How long did it take you to write?
Prince of Tricks was my NaNoWriMo book for 2012. I wrote the first 50,000 words in a month and took another month and a half to finish up. This is about twice as fast as I normally write, but I think forcing myself through NaNo helped me to write without inhibition, which worked for this book.

Q) What is your favorite thing about writing?
I love being able to make my characters happy after putting them through hell. Real life is often all about the hell part without ever getting the happy ending. Writing lets me change that, even if it’s only for imaginary people.

Q) What is your least favorite thing about writing?
There are certain points during the writing process when I have no idea what’s supposed to happen next. I don’t do much plotting, as I’ve found it only seems to make these moments more frequent, oddly enough. But when I hit one, it feels like plodding through mud for days, while my characters stubbornly refuse to tell me what’s going on until I finally have an “aha” moment.

Q) If you could be any famous person for one day, who would you be and why?
I guess I’d go with Queen Elizabeth II. Who wouldn’t want to be the queen for a day?

Q) What is the oldest thing in your fridge and how old is it?
A jar of wheat germ. It expired a year ago. I’m ashamed to say, I used it for my stuffing recipe on New Year’s Day. I’m throwing it out right now. ;)

Q) What can readers expect from you in the future?
There are two more books coming out this year in this series, King of Thieves, and Master of the Game, and I have some exciting news for 2015 that I can’t share yet. J