And the Season Starts

Happy Thanksgiving! I hope everyone has a fabulous day!


Last Sunday, the spouse decided we were going on our first snowmobile trip. We bought my sled right at the end of the season, and he got his a few months ago. Neither one of us had tried them out yet, so we wanted to ride them.

Snow was not a problem. We went up above Centennial, where the road is closed, and drove in. There wasn't a TON of snow, and the wind was blowing hard, so there were some blank spots. On the top of the mountain, it was a ground blizzard, I couldn't see a thing. We pushed through, though, and the weather cleared up. 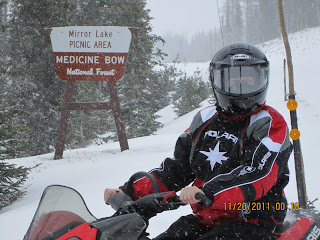 The trip up was very nice. My new sled is AWESOME! It has fabulous shocks and a seat heater. That will definitely come in handy when the boys go with us. The trip back down was disaster filled. 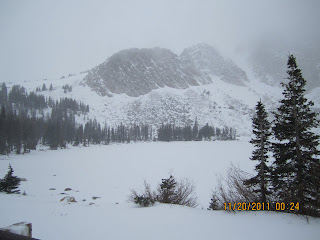 My spouse decided to get a little adventurous and went off trail. He cruised up a hill, and on his way down, slammed into a rock. Over the handlebars he went. A while later, we were cruising in the borrow ditch, and decided to head back up to the road. The incline was pretty steep, but I figured I could do it. Instead of hitting it straight on, I turned to soon and tipped the snowmobile. After we got it righted and started out again, my spouse hit another rock and flew over the handlebars again.

I have to admit, once I found out he was OK, I laughed. You would have done the same. Watching him sail through the air, he kind of looked like a ginger bread man, arms and legs sticking straight out. It was comical.

So, our first trip out wasn't the greatest, but that won't stop us. We'll give it a few more weeks, hope for more snow, then do it again!
Posted by Pembroke Sinclair
Email ThisBlogThis!Share to TwitterShare to FacebookShare to Pinterest
Newer Post Older Post Home